The IODP-China Office is calling for applications for the IODP Expeditions 395 (Reykjanes Mantle Convection) operated by the JOIDES Resolution.

Reykjanes Mantle Convection Expedition 395  will investigate mantle upwelling beneath Iceland, which supports the regional bathymetry and has led to changes in the height of oceanic gateways that control the strength of deep-water flow over geologic timescales. This drilling program contains three objectives: (1) to test contrasting hypotheses for the formation of V-shaped ridges that are the result of interaction between the Mid-Atlantic Ridge and the Iceland plume; (2) to understand temporal changes in ocean circulation and explore connections with plume activity; and (3) to reconstruct the evolving chemistry of hydrothermal fluids with increasing crustal age, varying sediment thickness, and crustal architecture.

Expedition 395 is based on IODP Proposal 892-Full2 (Mantle Dynamics, Paleoceanography and Climate Evolution in the North Atlantic Ocean) and will target the sediments and 130 m of igneous basement along with downhole logging at five sites east of Reykjanes Ridge. Four sites intersect V-shaped ridges/troughs pairs, one of which coincides with Bjorn Drift. The fifth site is located over 32.4 Ma oceanic crust devoid of V-shaped features, chosen to intersect Oligocene-Miocene sediments of Gardar Drift. Millennial-scale paleoclimate records are contained within rapidly accumulated sediments of contourite drifts in this region. The accumulation rate of the sediments is a proxy for current strength, and the sediments also provide constraints for climatic events including Pliocene warmth, the onset of Northern Hemisphere Glaciation, and abrupt Late Pleistocene climate change. Major, trace and isotope geochemistry of basalts will allow us to observe spatial and temporal variations in mantle melting processes. This combined approach will explore relationships between deep Earth processes, ocean circulation, and climate. 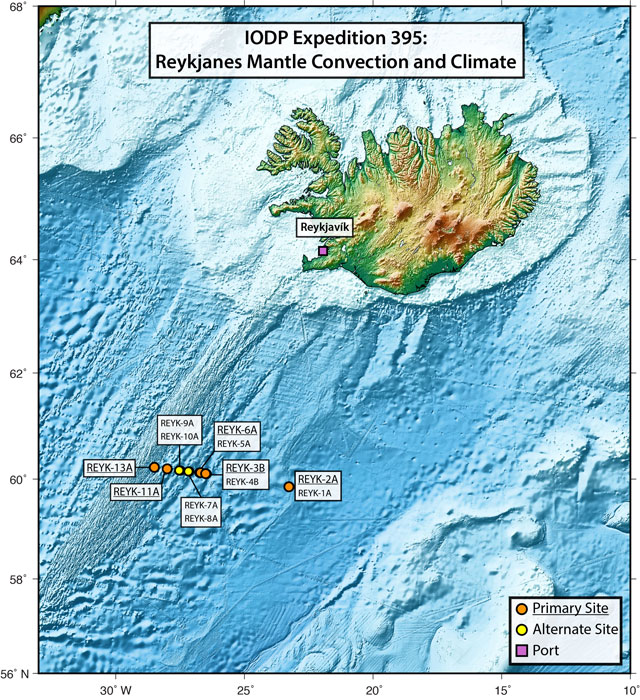