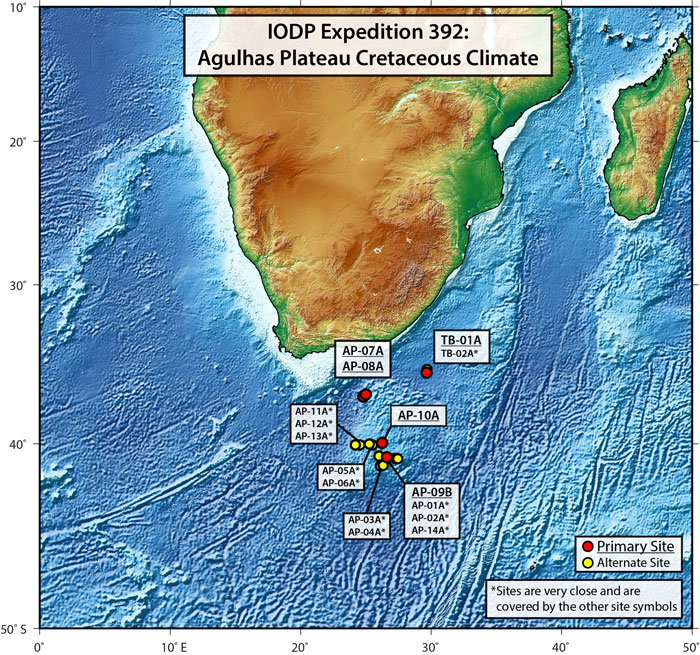 The IODP-China Office is calling for applications for the IODP Expeditions 392 (Agulhas Plateau Cretaceous Climate) operated by the JOIDES Resolution.

Agulhas Plateau Cretaceous Climate Expedition 392 is a scientific ocean drilling project that seeks to understand the evolution of Earth’s climate system from the Cretaceous Supergreenhouse into the Icehouse world of the Oligocene through examination of temperature, ocean circulation, and sedimentation changes as pCO2 fluctuated from as much as 3500 parts per million by volume (ppmv) to less than 560 ppmv. The Late Cretaceous was marked by reduced meridional temperature gradients and oceanic sedimentation was punctuated by episodic deposition of organic-rich sediment known as Oceanic Anoxic Events (OAEs); however, whether these events resulted from enhanced productivity or sluggish circulation remains unclear. This expedition also seeks to understand the nature and formation of the Agulhas Plateau as a Large Igneous Province (LIP) following the breakup of Gondwana and its impact on the timing of oceanic gateway opening, which has implications for oceanic circulation, carbon cycling, and global climate during the Late Cretaceous.

This expedition will address six primary questions. (1) Did Indian Ocean LIPs related to the breakup of Gondwana tap a similar source and show a similar temporal and geochemical evolution to coeval and older Pacific LIPs? (2) Did sedimentation start immediately after crust emplacement under subaerial conditions? (3) Do reflectors and unconformities identified in seismic sequences relate to changes in deep and intermediate water mass circulation and climatic events? (4) What was the paleotemperature history at high southern latitudes from the Cretaceous Supergreenhouse into the Paleocene? (5) Was the Cretaceous and Paleocene Southern Ocean a major source of deep-water formation that strongly influenced climatic changes? (6) What forcing factors caused Cretaceous OAEs and what effects did these events have on the high latitude climate, oceanography, and biota?

Expedition 392 is based on IODP Proposals 834-Full2 and 834-Add and will primarily target Cretaceous to Paleogene age sediment and igneous basement at five primary sites on Agulhas Plateau (4 sites) and Transkei Basin (1 site) to examine the nature of Agulhas Plateau basement, opening of oceanic gateways, and evolution of the climate system through the Cretaceous Supergreenhouse and into the Cenozoic.