The IODP-China Office is calling for applications for the IODP Expeditions 391 (Walvis Ridge Hotspot) operated by the JOIDES Resolution.

Walvis Ridge Hotspot Expedition 391 is a scientific ocean drilling project that seeks to understand the geodynamic significance and origin of the Walvis Ridge (WR), a long-lived hotspot trail that began ~132 Ma at the opening of the South Atlantic Ocean. Because of its duration and volcanic expression, WR is the most influential of Atlantic hotspots and is thought to have a deep mantle plume source that can be projected to the edge of the African large low shear wave velocity province (LLSVP), a hypothesized plume generation zone. The hotspot displays long-lived (since ~70 Ma) isotopic zonation, a characteristic thought to originate at the LLSVP edge, and may be the first example of a hotspot split into three isotopically distinct seamount chains. The hotspot interacted with the Mid-Atlantic Ridge (MAR) for most of its early history, producing both the WR and Rio Grande Rise (RGR). Valdivia Bank, a WR plateau, may have formed with the RGR around a microplate, and this added complexity raises questions about simple plume models and the geodynamic implications of this hotspot trail. 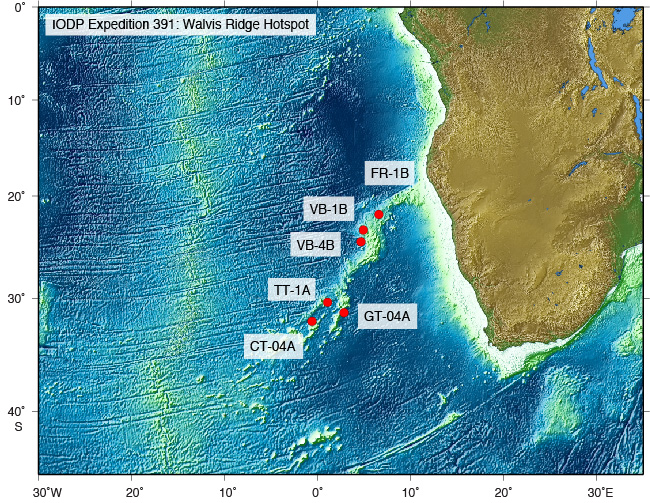 Primary questions are (1) whether the chain splitting and isotopic zonation are consistent with magma sourced at the LLSVP edge and what are the implications for the plume generation zone; (2) whether the chain is strictly age-progressive or whether there were plume pulses, microplates, or continental fragments involved; and (3) what do the expected large shifts in paleolatitude tell us about the fixity and geodynamics of this hotspot.

Expedition 391 is based on IODP Proposals 890-Full2 and 890-Add and will primarily target basaltic lava flows at six primary sites along the older portion of the ridge (~60, ~85, ~110 Ma) to test hypotheses about mantle plume zonation, hotspot drift, and the formation of Walvis Ridge. Basalt samples will be analyzed to document the geochemical and isotopic evolution of Walvis Ridge, especially its division into three isotopically distinct zones after ~60-70 Ma. High-precision geochronology will test models of ridge-hotspot interaction and examine the duration and stages of volcanism at individual sites. Finally, paleomagnetic measurements on igneous samples will constrain paleolatitude changes of seamounts along Walvis Ridge, allowing for more rigorous testing of models of hotspot motion and true polar wander.

China-based scientists should apply through the IODP-China Office, Applicants must submit the application form (/Assets/userfiles/sys_eb538c1c-65ff-4e82-8e6a-a1ef01127fed/files/196_Application Form.doc), CV and post-expedition research plan (in English) to the IODP-China Office (iodp_china@tongji.edu.cn) no later than 7th October 2019.